“We are right at the Berryessa BART station,” said Ralph Borelli, chairman of Borelli Investment Company” 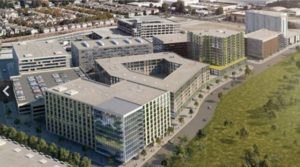 The developers of a transit village next to San Jose’s first BART station say they are pushing forward with more intense densities and have unveiled new visions of how the ambitious Berryessa district development might appear.

The development, called Market Park San Jose, has begun to rise on the site of the old Berryessa Flea Market near Berryessa and Sierra roads.

“This will be the most significant urban village development to date in San Jose,” said Erik Schoennauer, a land use and planning consultant who is working on the project for the site’s property owner, the Bumb family. “We are very excited.”

Roughly 1,000 residences are already completed or under construction on the north side of this new urban village. However, the part of the project on the south side of Berryessa Road, with its mix of offices, residences and retail, could usher in dramatic changes to this part of San Jose.

“We are right at the Berryessa BART station,” said Ralph Borelli, chairman of realty firm Borelli Investment Company, which is spearheading the development on behalf of the Bumb family.

The five office buildings will range in height from six stories to 10 stories and be of varying square footage totals.

Tech giants such as Mountain View-based Google, San Jose-based Adobe Systems, Cupertino-based Apple, Menlo Park-based Facebook and Seattle-based Amazon have undertaken a widening set of expansions that include office leases and, in numerous instances, purchases of land and buildings.

Huge campuses occupied by these digital behemoths have begun to sprout throughout Silicon Valley, and they have begun to actively craft plans for more major office centers in the region. Multiple experts say the expansion boom is unlike any they have witnessed in decades.

“This Market Park development is a way for a tech company to locate jobs right next to that BART station, and have a housing solution in place, plus the new retail,” Borelli said.

Read the rest of the article in the San Jose Mercury News, here.