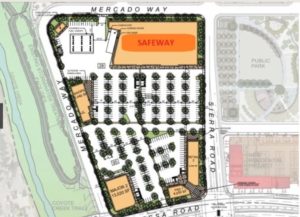 SAN JOSE — A transit village in San Jose’s Berryessa district that has begun to emerge near a future BART stop has landed a Safeway supermarket as an anchor tenant, a vital piece to the mixed-use development.

Safeway has signed a lease for 65,000 square feet to occupy a site called North Village of Market Park San Jose, which is being crafted as a village of offices, apartment towers, single-family homes, shops, restaurants and parks.

Rising on the site of the long-time Berryessa Flea Market, the development could be an early first test of San Jose’s quest to bolster its relatively modest job base and combat worsening traffic woes in the Bay Area by deploying transit-oriented projects with a blend of homes, workplaces and retail.

Read the rest of the story in the Mercury News.