SAN JOSE » Hundreds of apartments are poised to sprout in downtown San Jose now that a property sale and key financing are in place for a project to bring affordable housing to a site near the Diridon train station. 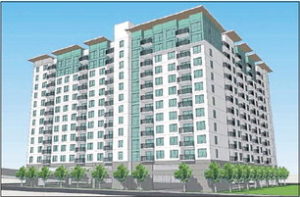 The McEvoy Apartments project, proposed for the corner of West San Carlos and McEvoy streets, would create 319 affordable residential units in a two-stage development, according to the developer and the financer for the residential complex.

The lender provided $9.4 million to finance the purchase, and another $6.4 million for pre-development costs. The financing didn’t indicate funding for any construction at this point.

“This is an affordable project, and an affordable housing project in Silicon Valley has zero market risk,” said Ralph Borelli, principal executive with San Jose-based Borelli Investment Company. Borelli, a commercial realty broker, helped arrange the deal for the S& S Welding owners, the Nick D’Arpino family, to sell the property to First Community Housing. “We are in a housing crisis and there is insatiable demand for housing.”

The first phase of building would provide a mix of one-, two- and threebedroom rental apartments, while the second phase would consist primarily of studios, according to Housing Trust Silicon Valley.

More of these developments could materialize in this part of downtown San Jose, said Bob Staedler, principal executive with Silicon Valley Synergy, a land use and planning consultancy.

“This area is evolving into downtown San Jose 2.0,” Staedler said. “You will see more of these properties transition to mixed-use projects when you consider the cost of housing and the location near Google andDiridon station.”

Google is planning a mixed-use, transit-oriented community of offices, homes, shops, restaurants and open spaces where 15,000 to 20,000 of the search giant’s employees would work near the Diridon transit station and SAP Center.

“This location is absolutely what drove First Community Housing to do this deal,” Borelli said. Contact George Avalos at 408-8595167.

The planned 14-story, 319-unit residential tower is located in downtown San Jose at the corner of McEvoy and West San Carlos streets. Developers will replace the welding shop currently at the location.