You are here: Home / Blog / Are You Ready for Some Silicon Valley Football?

Are You Ready for Some Silicon Valley Football? 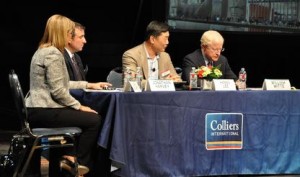 Few things conjure images of extreme excitement and fan devotion as football, and especially the Super Bowl. For cities that play home to National Football League franchises, they are gifts that keep on giving and giving. It is precisely the reason why Silicon Valley’s Fifteenth Annual Trends 2014 Real Estate Forecast, hosted by Colliers International on Wednesday in San Jose, made the new San Francisco 49ers Levi’s stadium in Santa Clara—home to the league’s fiftieth annual Big Game in 2016—the centerpiece of its commercial real estate panel.

Jonathan Harvey, the Turner-Devcon project director of the 21-acre Levi’s stadium site, says the field will be ready for play on August 2, just 5 months away, when the San Jose Earthquakes will host their first soccer match there. The field itself is well underway and nearly ready to sod. The US Golf Association sand-based natural turf has been growing for the last year in Livingston, Calif., and the sod will be brought to the job site shortly. Since the project broke ground in late April 2012, the Devcon-Turner team has been busy preparing the 68,991 seat LEED Gold-certified stadium for its fall 2014 debut.

Read the rest of the story at The Registry, here.